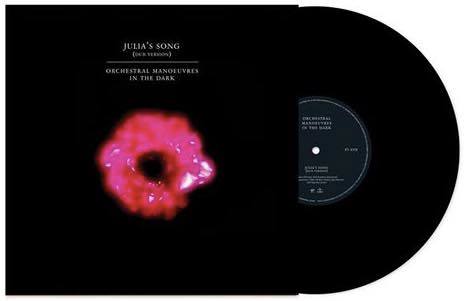 With only 1000 copies released, this special dub version of live-favourite 'Julia's Song' (so called because the lyrics were written by Julia Kneale (Andy McCluskey's ex-girlfriend) who, whilst performing with OMD parent-band the Id, wanted a song to sing herself that she had at least partly written) was highly sought after by die-hard OMD fans.

Featuring brass contributions from brothers Graham and Neil Weir (who had toured with OMD since 1985), the track also sounds a great deal more subtle than the earlier original; the added instruments allows the listener to focus more on the musicality of the track, as well as giving the song the reggae-influenced sound that the group further pursued on 1984's 'Junk Culture' (an album that also happened to be re-issued- with bonus tracks- in 2015).

To compliment this similarity, not only does 'Julia's Song' also features a similar design to that of the Junk Culture album, but it's B-side- '10 to 1', an intimate, yet almost-spiteful lover's confession- was also a track shelved from the 'Junk Culture' sessions.

Overall, 'Julia's Song' is an interesting re-working of a classic track- and also served to remind listeners that, even in 2015 (nearly forty years after the group released their first single), OMD's songs still had the power to enthral.