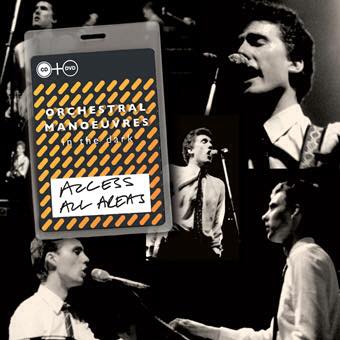 Released by the BBC as part of the 'British Live Performance' series, Access All Areas' is- according to the CD sleeve description- a 'vital snapshot of [OMD] between the release of their eponymous first and breakthrough second albums'.
At first, this description seems truthful enough. The seven songs included were all either included on the band's first album (released February 1980) or destined to be featured on the second (titled 'Organisation', named after an early incarnation of Kraftwerk and released October 1980).
The more one listens, however, the one realises that this album is less of a 'snapshot' and more of a 'prediction'; the mere energy of the performance alone, never mind the quality of the songs themselves, is enough evidence to give the audience an indication of the musical force that OMD were destined to become, going on to achieve number ones throughout Europe and release the iconic 'Architecture and Morality' album less than a year after this live set was recorded.

It is on the DVD of this package, however, that the short set really comes alive. McCluskey's heartfelt vocals, notoriously manic dance moves and occasional remarks to the enthusiastic crowd ('I wish I was down there with you and not up here!' he drawls in a very nearly self-mocking northern accent) light up the stage more than any light show arrangement- something that the band's performances were known for in the very early days- ever could.
Although the performance itself is only fairly short, the emotion, maturity and energy that it harbours (particularly for a band so young) is something more than a little bit sweet.