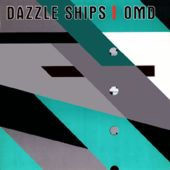 Dazzle Ships by Orchestral Manoeuvers In The Dark

Although it was always going to be difficult to repeat the success of OMD's previous album 'Architecture and Morality', 'Dazzle Ships' was an album that 'killed [the band] dead', according to Andy McCluskey. Luscious ballads and thoughtful, unique lyrics had been replaced with just under thirty five minutes of odd synthesiser patterns, robotic voices and radio sounds, and as a result, the album was slammed by the majority of critics and fans alike (despite the inclusion of two single-worthy tracks 'Telegraph' and 'Genetic Engineering' on the LP). However, since it's initially poor reception, Dazzle Ships has been cited by many as not only a 'masterpiece', but also a 'buried treasure' (MOJO Magazine)- and rightly so. 'Radio Waves' (an updated version of a song written for OMD's predecessor band The Id) and 'Telegraph' are catchy and strangely uplifting, whilst more contemplative tracks such as 'Of All The Things We've Made' provide a mellow yet unique contrast to the others' pop 'bounciness'. Yes, it might take a few listens to appreciate it properly, but overall 'Dazzle Ships' still represents everything that OMD was - and still is- as a band.

Perhaps it was just a little too 'dazzling' for the listeners of 1983.