The decision to play a Butlins gig provoked much debate amongst fans at the time of its announcement.   Putting all opinions aside, the event was a mini indoor festival which gave the UK a second fix of OMD this year and essentially reminded non fans of their impressive back catalogue and the fact that the band are  still in the studio.

We knew what we were getting; a solid greatest hits set from a two man show.  The Centre Stage venue was packed to the rafters when the band emerged to play Enola Gay.  The capacity crowd were treated to a stellar set packed with the old faithfuls as well as a couple of pleasant surprises. 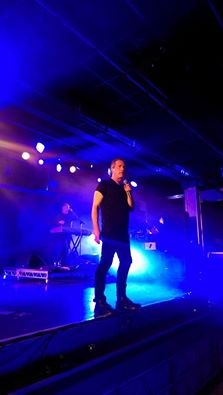 From the outset Andy worked his magic animating the crowd. Proceedings upped a pace and we were warned of things to come when Andy urged the ladies in the audience to tighten their bra straps in anticipation of much wild dancing....

History of Modern bounded in, leaving non fans wondering why they didn’t recognise it from back in the day, before Paul returned us to 1986 with Forever Live and Die and even further back with Souvenir which lead into the holy trinity with Joan of Arc and Maid of Orleans, all delivered flawlessly.

The pace temporarily slowed down a notch when Andy asked us to remember the summer and launched into Talking Loud and Clear.  Next up for an airing was So in Love, not a UK festival staple, so a welcome change.   A homage to Pandora followed ending in Andy kissing the silver screen as opposed to the machine.

The atmosphere in the venue was certainly electric by the time the final song swept in.   Electricity left everyone wondering what the encore/s may be...

OMD temporarily left the stage for all of a couple of minutes before they returned and Andy explained that they had exhausted their two man only repertoire.  He introduced If you leave by asking us to pretend we were Americans as this was usually only played at US gigs.  The audience were not satisfied with just one song and demanded more.  A reprise of Enola Gay was duly delivered.  Job done.  Sheer brilliance. Tumultuous applause.  Happy campers all around.  What on earth had all the fuss been about? 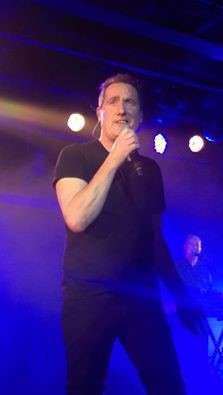 “I never thought I’d see PIL and Sisters of Mercy fans dancing to cheesy 80s pop songs....”  smiled a bemused Andy McCluskey  reacting to the amazing reception afforded OMD at the Sinners Day Festival, Hasselt.
It had been a wildcard of a festival for them, uncharted waters for a synthpop band,  but long before  Enola Gay had opened up the 55 minute set, the mosh pit had shut down as the crowd closed ranks, pushed forward and fell silent in respectful anticipation.
As a two piece band, the stage potentially looked in danger of swallowing them up, but this fear was never going to become reality with Andy’s dancing covering the  entire surface area of the stage with every twist and turn.

We were treated to a selection of greatest hits and also an updated version of Radio Waves which name checked Putin and Trump and was particularly appreciated by the contingent of travelling OMD fans on the front row.

Andy urged us not to be afraid of old men with synthesizers, as he spun into post 2010 songs such as Metroland and History of Modern.   Joan of Arc passed without incident, no fluffing lines there, the usual offending song, but so as not to disappoint us, a small hiccup occurred in Locomotion , cue expletive, then the order,  “You sing it!”

Onstage, the overall  sound was a little too bass heavy with a fair bit of vibration, a constant thudding on subsequent video playback.  I actually saw Paul’s keyboard shaking at one point.

It was a change to hear So in Love, something denied UK audiences, but I have to confess we missed Martin and his saxophone at this point and of course we wanted real drums  on Maid of Orleans ; a drum machine can never re- produce the real surround sound and dramatic effect.  Despite this, Maid of Orleans and Andy’s dancing secured over two minutes of rapturous applause, from punks, Goths, new wavers and various other unidentifiable entities in the arena audience.

A hugely successful and well received set finished with Electricity.   Cue huge applause. “This is why we love Belguim” beamed Andy. 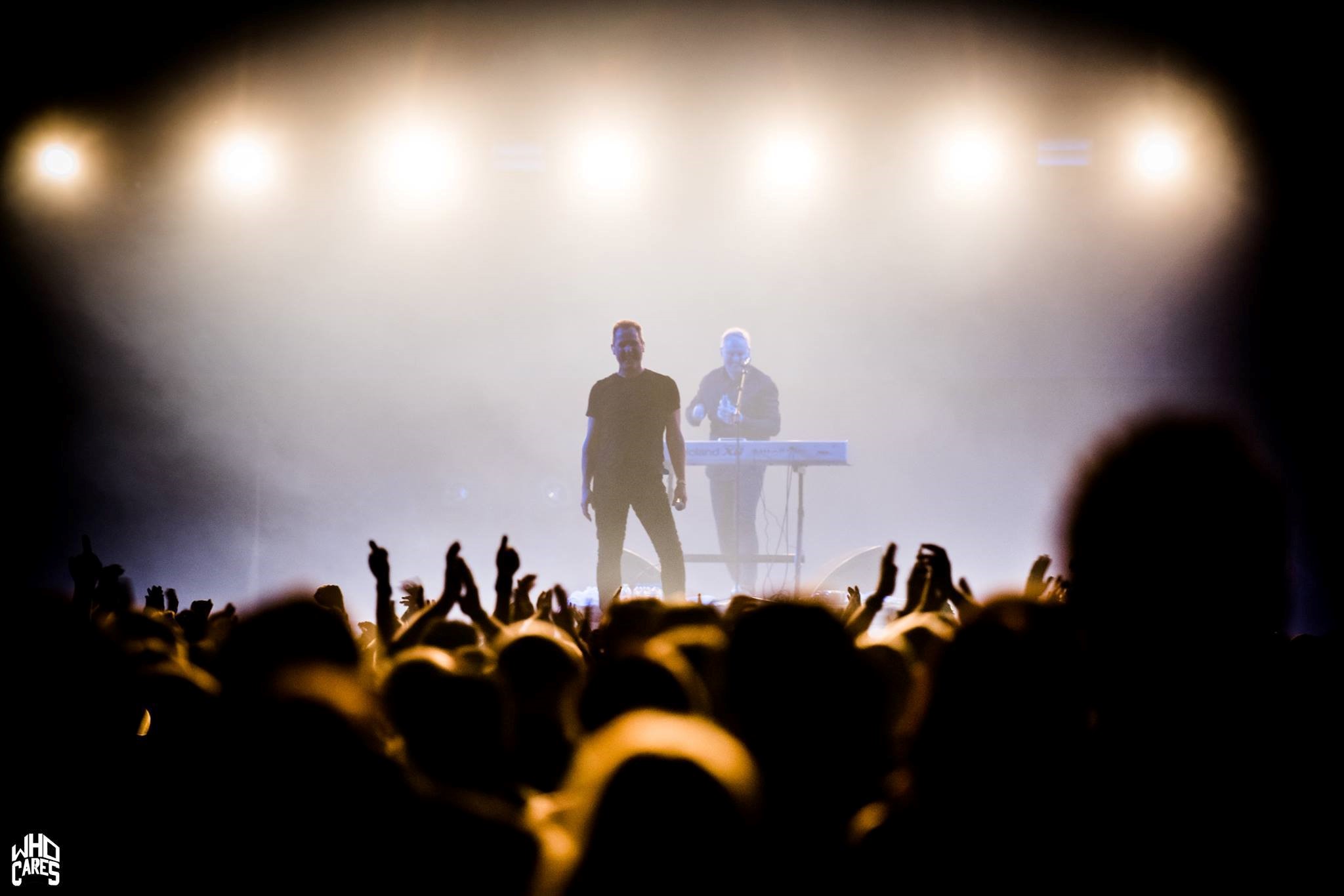 OMD will be playing the Wychwood Festival 2nd - 4th June 2017

Tickets and more details from http://wychwoodfestival.com/ 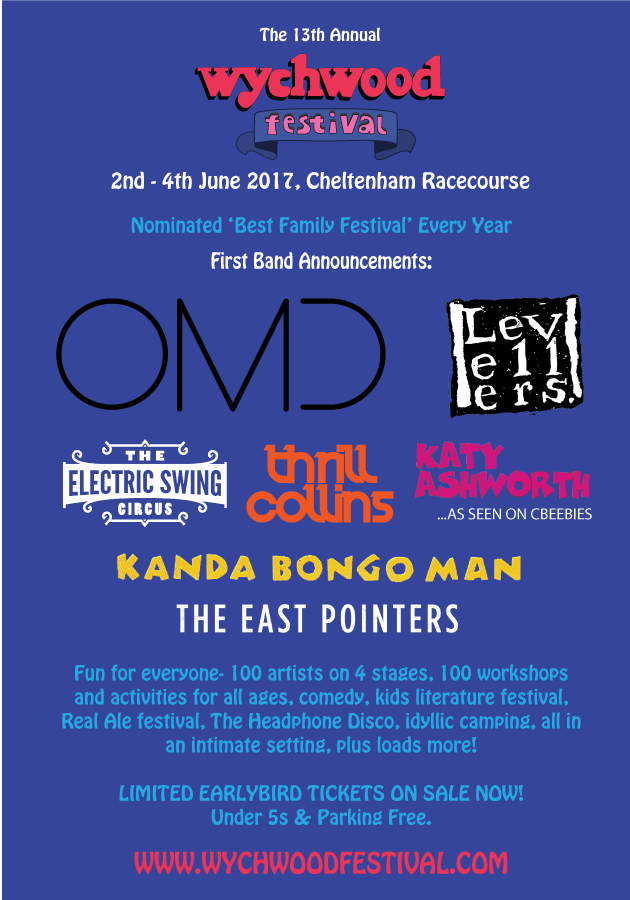 1997 and an Orchestral Manoeuvres in the Dark Fan convention is taking place. We ask the fans on the Saturday Afternoon to gather in the car park as we would like to take everyone for a walk.
No one knew what we had in store, on route some are complaining about being taken for a walk, and then we arrive at the back door to an unassuming building, and listen as fans ask “where the hell are we”
This was the door to The Motor Museum, which was now a recording studio for Orchestral Manoeuvres in the Dark, and what happened next was just priceless and to gasps Andy McCluskey makes an appearance.
This is followed by a fan question and answer session.

First show in Sky Arts 3rd June 2016 This is just a edit showing the OMD bits along with the words I said in the show.
A very strange time during the cold war and the Protect and Survive propaganda being out by the government at the time.