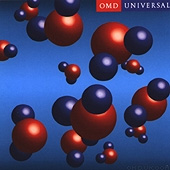 By the mid-'90s, the majority of synthesiser and new romantic bands- many of whom had ruled the hit parade during the 1980s - had fallen by the wayside, left with the unfortunate fate of trying to recreate their earlier successes whilst channelling the Brit-pop style of guitar-based groups such as Oasis, Pulp and Blur. 'Horror' was the word that Andy McCluskey used to describe it, and it's hardly surprising, seeing as he was one of the musicians hardest hit by this drastic change in the public's taste in music.

So, for McCluskey, 'Universal' was a compromise- instead of returning to the band's roots, as may have perhaps been advisable, he moved away from synthesisers and turned to classical orchestration. Although this resulted in a substantial number of beautifully written and played tracks, it also meant that it virtually went over the heads of both the rock and pop genres.

The track 'Universal' itself, kicks off the album as an appeal-to-all, anthemic track ('we all bleed the same blood/we all need the same love'), as is second track 'Walking On The Milky Way. From then on, however, the album follows a more sinister path; 'The Black Sea' contemplates the morbid themes of death and torture, 'Too Late' spits bitterness and regret, whilst undoubted highlight 'If You're Still In Love With Me' seems initially uplifting (first you say you're in love with me/and that it lasts eternally) but quickly takes a somber- if musically enchanting- turn ('when I beg for freedom you only chain me down/with every day that passes now the answer can't be found).

Eventually, it was the commercial failure of 'Universal' that led to OMD's temporary demise- the group would not release another studio album for over a decade.