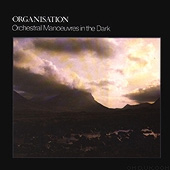 And a really nice review by Member D

Although recorded and produced just months after Orchestral Manoeuvres in the Dark‘s debut album and in fact released in the same year, Organisation is quite a different affair to its predecessor. Not only is a more professional and polished sound achieved thanks to producer Mike Howlett and the wider scope no doubt offered at the Advision Studios, but the songs here are deeper and darker creating a much heavier atmosphere with respect to what we had been given in the first album.

The duo of McCluskey and Humphreys continued to develop songs from the repertoire of their earlier  days as the Id yet the effect is quite different. The band had begun to become an almost ‘household’ name, thanks to the wiser abbreviation to OMD but most of all to the success of their Europe-wide hit single Enola Gay, once more approaching the subject of war but typically you could dance to it or even whistle it while walking down the street, (although to this day many still do not realise that the song is about the plane that dropped the bomb on Hiroshima!) The song had been left off the debut album typically 'unfinished' (witness the Peel Sessions version elsewhere) but again as with the single version of Messages, had been tightened up and whipped into shape by Mike Howlett giving it a sharper, stronger sound. The band themselves (slowly expanding to include M. Holmes and M. Cooper for now) also presented themselves in a smarter version with neat hair cuts, ties and tank tops knitted by their Mums, a ‘look’ which would characterise and stay with them for some time.

But back to the album Organisation (an early name used by idols Kraftwerk): Enola Gay starts off side one not only as the punchy familiar hit single but also seems to say ‘OK we’ve finished with the pop stuff now, let’s get deep!’. Indeed the gloomy opening chimes of 2nd Thought lead us into the darker sounds of the album without abandoning the idea of being able to dance and be angstful at the same time (“It's gone so far and now it seems / It's only me / Who cares "). VCLXI, another Kraftwerk reference, is about as loud and chaotic as OMD could get, almost the antithesis of Enola Gay, with treated piano banging, whirring disorderly synths and incomprehensible lyrics… play it loud! Order is however restored in an OMD kind of way with Motion & Heart, adopting a regular dance beat and vaudeville style keyboard melodies and a typically enigmatic lyric about a tortured relationship (“Each time we tried we failed as before..”); again witness the Peel session version just a few weeks earlier to hear a much more anarchic disorderly version. Statues is one of the album's most moving moments and closes side one. Apparently written about or at least inspired by the death of the Joy Division singer Ian Curtis earlier in the year (“the way you move / I can’t explain”).  This enigmatic, epic track remains one of OMD’s finest moments ever and is played live even to this day.

Side 2 comes rumbling and slowly crashing in with The Misunderstanding, again from The Id days yet in a completely new and darker form, angrier and more scathing with Holmes’ snare drum punctuating the lyrics (“We’ll sneak out the back door, and close it!”). But let’s not get too uptight ..it’s sort of back down to earth again with the rather oddball cover version of The More I See You, again darker and more sinister with respect to the chirpy MOR original with McCluskey’s ‘every daaay’ finale making it almost pervy..Indeed the live version reaches an almost orgasmic climax! But not a track to be underestimated, with clever synth structures and  the live yet treated drums giving it the edge. Promise represents Paul Humphrey’s debut both as main writer and lead vocalist on an OMD track. The atmosphere is at once sinister and appealing and the lyric typically enigmatic (“So far from me to be the same / I'll try again I'm here alone “) and the long leadout instrumental gives ample scope for various synth effects with a beefy backing. Which brings us nicely into the final track Stanlow, OMD's anthem to , yes, an oil refinery - what else? The slow intro with appropriate industrial sound effects and faux-brass section lead us gently into the poetry and beauty of the main lyric and melody (“I've seen her face in every day / The same routine along the way “), the band typically allowing us to see the attractive side of  a potentially ugly artefact, only to leave us with the disturbing crashing sounds of the refinery still resounding in our ears at the album’s close.

Ironically the overall sound of Organisation seemed more in line with their earlier experimental work, placed on the shelf for the debut album but revived here in its original form as a free 7" single DEP 2 and included for the 2003 Cd re-issue. The four tracks Introducing Radios, Distance Fades Between Us, Progress and  Once When I Was Six were recorded during a gig at Eric's Club, Liverpool in 1978 and feature a spoken intro and outro by Dave Fairbairn. A true performance of “Orchestral Manoeuvres in the Dark”. The music here has no conventional lyrics and indeed no conventional structure at all with tapes, sound effects serving as backing to McCluskey and Humphreys’ live bass and keyboards. An invaluable testament to the band’s early work and concept.

The CD is completed with Annex, the typically experimental B side to Enola Gay, and another version of Electricity recorded at Ridge Farm and produced by Howlett.

This is and never was an easy album yet already shows a maturity in writing and musicianship which the first album did not. Despite carrying only one hit single the album was a huge success, yet less than a year later the band would become even more daring in their subject matter and musical styles. The best was yet to come....