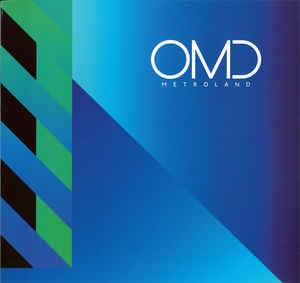 Even though lyrically, melodically and structurally, 'Metroland' sounds like it has been plucked straight from a flying-cars-and-soaring-silver-skyscrapers-type future, it in fact harks back to the past in more ways than one. The concept of the song, for example, was inspired by the 1920's definition of the word 'Metroland' itself (essentially meaning 'the suburbs') whilst the hypnotic video (a subtle yet thought-provoking animated affair, and including cartoon versions of the band members) centres around a steam train reminiscent of the on featured in immediately the video for the band's 1984 hit 'Locomotion'.

Another false first impression 'Metroland' gives is that it's going to be one of those minimalistic songs with an interesting drum pattern but not a lot else. The listener is soon rewarded, however, when the track suddenly becomes beautifully rich, building up layers of choral sounds and 'fat' synths in the verses, then building up even further to a climax of a refrain plastered with echo and stuffed with glorious harmonies.

Primary B-side 'The Great White Silence' is also worth a mention; it's an ominous track that, with sinister lyrics like '...crawls in from the dark/crushes your soul/cripples your heart/and it's gone...', could almost be the soundtrack to a horrifyingly intense nightmare, creeping up on you, terrifying you, and then finally passing, only for the morbid presence of its impact to stay with you until it returns to 'torture and haunt' again.

It is as a complete single, therefore, that 'Metroland' has the most impact. As a standalone track, it has you tapping your foot, perhaps, but when compared to its haunting B-side, it becomes a soaring, majestic, strangely uplifting attempt of escape from being consumed by the monotony of 'living' and 'dying', 'loving and lying', and perhaps even by 'the great white silence' of everyday life itself.

N.B. It should be noted that the radio edit of 'Metroland' is considerably shorter than the single/album version, with the former lasting for just under four minutes, and the latter clocking in at just over seven and a half.