OMD Box Set by Orchestral Manoeuvres In The Dark

OMD Box Set by Orchestral Manoeuvres In The Dark 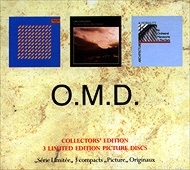 Album 1- Orchestral Manoeuvres In The Dark

Consisting of the group's first three albums (released February 1980, October 1980 and November 1981 respectively) this particular 'OMD Box Set' is a must-have for all those seeking an introduction to the band's extensive work.

The eponymously titled first album is a generous slice of the group's own unique brand of naïve synthpop, whilst second album 'Organisation' is moodier and more sinister, reflecting not only OMD's change in attitude as a group, but their ability to mature as songwriters and musicians in a very short space of time (the albums were released only eight months apart).

The third album, 'Architecture and Morality'- has been cited by many as the group's 'piéce de resistance', and rightly so. According to to lead singer Andy McCluskey, '[the title] seemed to sum up the way [OMD] used to work, in a musical sense- it was like the architecture of the machine-orientated rhythm track plus the morality of the words and melodies'. Leading single 'Souvenir' is a perfect example of this 'architecture and morality', as it incorporated a 'gentle, sparkling synthesiser hook' with a throbbing drum beat, and Paul Humphreys wispy, angelic voice. It was the first of the group's singles to feature Humphreys on lead vocals, so therefore also it added a different dimension (still working on the grounds of architecture) to the song that hadn't been present on previous OMD singles. Extra intrigue was created around the album due to the fact that two further singles had virtually the same title ('Joan of Arc' and 'Joan of Arc (Maid of Orleans)'), despite being very different songs.

Both, however- like the majority of songs on 'Architecture...' were beautifully crafted pieces of pop music, and helped to turn OMD from a little-known group from the Wirral, to a household name.